It wasn’t even her tenth cast in the Milwaukee river on a late October day when AC felt the bite as she set the hook. A perfect set as she leaned back preparing for the fight….

LADIES, ladies, ladies AND and and GENTLEMEN gentlemen gentlemen. WELCOME welcome welcome  TO to to WWF. Women’s World of Fishing is proud to have in this corner. Weighing in at 115 lbs, 5feet and 2 inches, known to wear wading boots too big for her because of her incredibly petite feet, Feared by all boulders, The baker of the Northshore where sugar is a main food group, Known as the rock skippin queen of Duluth, the tent pitching bitch of the North, Where one minute she struts her stuff in BCBG down the office hall and the next she is knee dip in some river adorned in her Simms waders, the keeper of a thousand bandannas that decorate her backpack like some Aerosmith lookalike and enough tees to rock your world, Brandy eat your heart out this girl has all the sailors hearts singing. Let’s hear it for…..AAAAAAAAAACCCCCCCCC!
And in this corner. Weighing in at a little over 32 lbs, but we’ll say 34 because all fishermen lie, known as the migrating son of a fish, from Chile to Norway, he’s high in omega 3 fatty acids and served in every Japanese restaurant across the US.  Feared by all those with high cholesterol, Known to throw a grizzly for a loop, dubbed the leaper of the East, where it’s famous relatives are known among the elitist of the celebrities, like Larry KING and Jerry SPRINGER. Let’s hear it for….THE SALMOOOOONNNNNN!
Oh this one is going to be a real Barnburner. A catch weight yes, but that salmon has quite the chin on him. Able to throw punches, she’s never seen before. It’s a tight lined match indeed. He throws the first punch. Ohh, that was a close one as she avoids the hit. He goes for a second punch, leaping out of the water. Ahhh, she survives that one. She goes below the belt as he pulls her deeper into water. Farther and farther down river he pulls her, taking out line and working side to side as if taught by Cus D’Amato himself. And this salmon thought he had a bum rush on his hands. Oh no mister Saturday night special, this fisher lady is going nowhere but to the net with you.
She’s down for the count, she’s down for the count. Rod bent, knees planted, will she over come too? Get up Get up! Net it! He fakes left, she sends her line right. He’s throwing her feints up and down, pulling her down stream. 1st round, 2nd round, will this match ever end? He’s pulling out line dodging side to side. And here comes her haymaker, the wild reel, she reels keeping her rod high. Can she make it? Will she survive this second round? She makes her jab, reeling and pulling, reeling and pulling. She is on the ropes, she’s on the ropes.  That fish has one mighty peekaboo face. She can’t see what he’s going to throw next. Oh she allows the rope a dope. That’s it, tire him out. 15 seconds to go in the round. Oh how she wishes she had skinned those gloves beforehand. Her freezing small fingers grip the rod, praying for the strength to fight on. Don’t you dare take the dive you salmon, don’t throw this match. And that’s it, a sudden last reel and she nets him.  Salmon goes down Salmons goes down. Ac beats salmon… 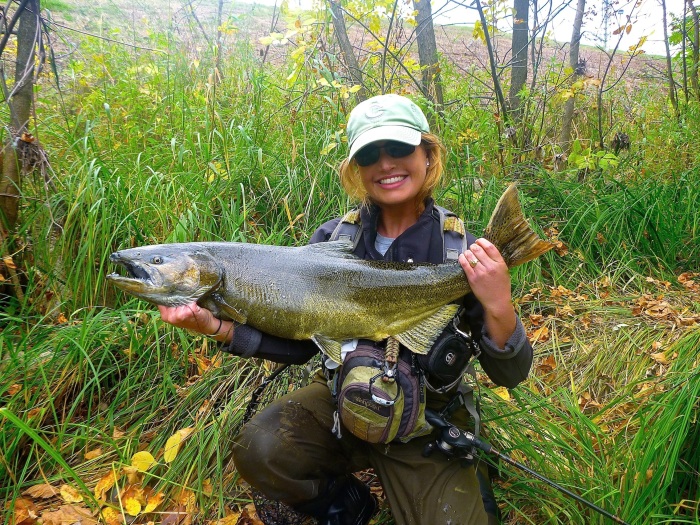 🙂 Sorry we had to pull a boxing theme. It was just time. After AC’s salmon catch she released her back in the water to let her eggs live to see another day. Shout out to Dad who helped AC chase the beast for a good 20 minute fight… 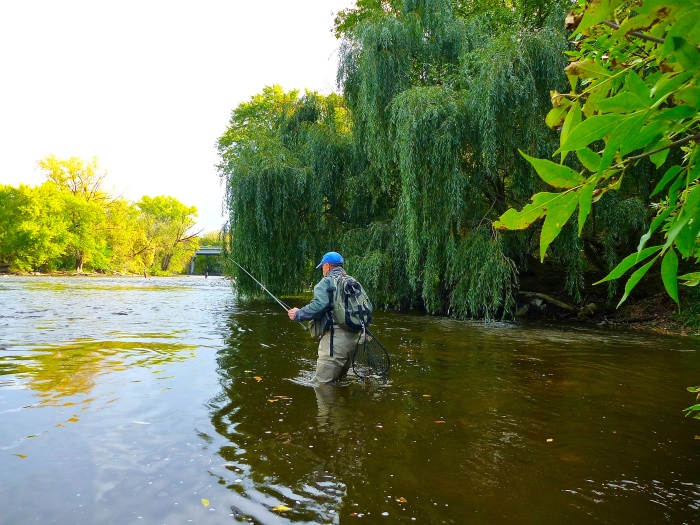